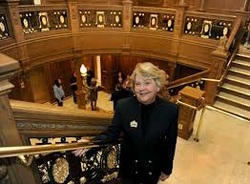 Co-Owner and Executive Vice President of the Marketing, Sales, and Operations for Titanic Museum Attractions

The 2012 Southwest Missouri Homeschool History Fair is pleased to announce that Mary Kellogg-Josyln will be a feature speaker at this year’s event. She will be providing fairgoers with offering wonderful information about the Titanic Museum and an overview of the fateful voyage of the legendary vessel in this, the 100th Anniversary of the tragedy.

Ms. Kellogg has an extensive background in entertainment, marketing and production. She served for 20 years as Executive Vice President Television for The Walt Disney Company.  During this period she worked directly with Disney CEO, Michael Eisner and Studio Chairman Jeffrey Katzenberg, contributing to their successful effort to revitalize the Walt Disney Company with creative energy and evolutionary concepts.  In her operations capacity she worked closely with Don Ohlmeyer, former President of NBC’s West Coast Division, in overseeing production of Disney LIVE Event Specials

At Disney Ms. Kellogg was responsible for bringing to television the highly successful “Live with Regis and (Kathie Lee) Kelly” show for twenty years and served as the executive-in-charge of this show.  . She helped create, develop and served as the executive-in-charge of “Who Wants to be a Millionaire” (both on television and as an attraction at Walt Disney World and Disneyland), plus other weekly and daily shows. During her career at Disney she oversaw over 100 major television shows. At Disney Mary was always known as the ‘go-to-person’ if you wanted to get things accomplished.  Plus Mary became very accomplished at handling ‘stars-talent’.

As an executive director in both marketing and programming at CBS, Inc. for 10 years Ms. Kellogg negotiated exclusive sports packages with Los Angeles Rams owner, Georgia Frontiere; entertainment packages with King World, Paramount Television and with legendary movie/TV director and producer John Landis. She shared multiple Emmy honors during her tenures at Disney and CBS.   Ms. Kellogg has operating experience both in the U.S. and abroad.

As Cedar Bay Entertainment’s Executive Vice President, Operations, Ms. Kellogg is in charge of developing and coordinating marketing, advertising, sales, public relations and merchandising strategies for the company’s Titanic Branson operation, and for the Pigeon Forge Titanic attraction. In addition she creates year-round local and national media events for the museum attractions.   All department heads report directly to Ms. Kellogg.

“Based on exceptional marketing success,” Titanic Branson was selected for the 2010 Best of Branson Award in the Amusement Theme Park category by the U.S. Commerce Association.

In September of 2012, the Titanic Museum Attraction received best marketing campaign at the Missouri State Tourism Awards for the 2012 campaign dedicated to the 100th anniversary of Titanic’s Maiden Voyage.