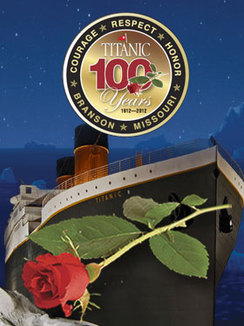 Dive to Titanic
By John Joslyn, owner of the Titanic Museum Attraction

I embarked on the adventure of a lifetime. Two years earlier, the Woods Hole Oceanographic Institute had discovered Titanic and now I co-led a 6 million dollar expedition to the site of the sinking.

Our team’s mission was to explore the wreckage, retrieve artifacts and film the broken remains. Standing on the slippery deck of our salvage ship, it was thrilling to hover more than 2.5 miles above the legendary Titanic.

Our team spent 44 days at sea and the expedition dove to the site 32 times in an amazing 20 million dollar submersible. We returned with hundreds of hours of haunting ghost-like images. They formed the framework of “Return to Titanic…Live!” a two-hour television special that I co-produced with my partner Doug Lewelyn. This special became the second highest rated live TV documentary ever.

After 25 years Titanic remains my magnificent obsession. I’ve dedicated my career to her and the 2,208 passengers and crew aboard its tragic maiden voyage. It started with TV shows and became these permanent Titanic Museum Attractions in Branson, MO and Pigeon Forge, TN.

These giant museum attractions exhibit one of the largest permanent collections of Titanic artifacts and memorabilia. Inside, guests enter a unique world where they can climb an exact replica of the most famous staircase--Titanic’s hand-crafted Grand Staircase.

I want to share as closely as possible with guests what Titanic’s actual passengers and crew experienced aboard ship. Visitors can touch finely carved wooden inlays, grasp the wheel on the captain’s bridge, tap out messages on the ship’s wireless, feel an iceberg’s chill, stroll decks and galleries and listen to stories told by real survivors. I think of it as “Living Theatre” with guests as part of the experience. Plus it offers a realistic, interactive educational experience for students of all ages.

The museum will be on hand throughout the day to give visitors to the 2012 Southwest Missouri Homeschool History Fair more fascinating details about the seminal moment in history. The Titanic Museum Attraction is located at 3235 76 Country Boulevard, Branson, Missouri 65616. For more information about the museum, you may contact them directly at 800.381.7670, or visit their website at http://www.titanicbranson.com/.
Powered by